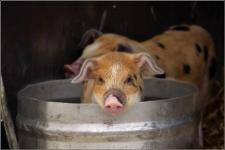 The real-life creation of human-animal hybrids, which is on the verge of going from hypothesis to reality, has been the subject of ongoing debate since the dawn of genetic engineering. But recent advances have made these creatures of dreams (or nightmares) no longer hypothetical, thanks to two major milestones in the world of xenotransplantation: the transfer of living cells, tissues, or organs from one species to another.

In September 2021, the University of Alabama at Birmingham announced the first successful clinical-grade transplant of gene-edited pig kidneys into a human (albeit brain-dead), replacing the recipient’s native kidneys in a display of function. The kidney, which was attached to the leg of a deceased patient maintained on a ventilator, began functioning—making large amounts of urine—in the short experimental window before being terminated after 54 hours. A similar success connecting pig kidneys to two more brain-dead patients was reported just this week from New York University.

The other major milestone was in January 2022, when the world witnessed the first successful pig heart xenotransplantation. David Bennett Sr., a 57-year-old diagnosed with terminal... see more