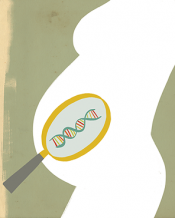 At least one private company has begun offering services to allow parents undergoing in-vitro fertilization (IVF) to screen embryos for complex genetic risks with a procedure called polygenic embryo screening (PES). Although genetic testing of embryos for the risk of some severe diseases with known strong genetic links (cystic fibrosis or Tay-Sachs, for instance) has existed for decades, PES is a new form of screening that these companies claim can identify the risk for complex medical problems, including psychiatric disorders, that do not have specific known risk genes.

However, this approach lacks scientific validity and brings up a host of ethical issues, according to a new article in top-tier psychiatric journal Lancet Psychiatry.

“We are concerned that these tests are being marketed with limited empirical data behind them and virtually no scientific or ethical discussion. Without more research, it is unlikely that medical providers and the general public will have sufficient understanding to evaluate the pros and cons of this technology,” the researchers write.

The authors were led by Todd Lencz, a prolific expert on the genetics of... see more