CRISPR-Based Therapeutics Blaze an In Vivo Path to the Clinic 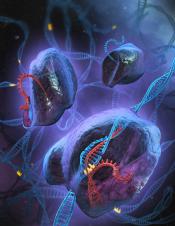 CRISPR, which stands for clustered regularly interspaced short palindromic repeats, came to notice as a curious pattern in bacterial DNA. Attempts to understand CRISPR led to the discovery of bacterial immune systems. Even better, these systems were found to include RNA-programmable nucleases, that is, CRISPR-associated proteins (Cas proteins) that complex with guide RNAs to target specific DNA sequences.

Cas proteins and guide RNAs have become mainstays of CRISPR genome editing technology, and this technology has been used to realize ex vivo therapies. For example, CRISPR-modified T cells are being deployed in immunotherapies, and CRISPR-modified hematopoietic stem cells are showing promise against sickle-cell disease and β-thalassemia.

More ambitious CRISPR-based in vivo therapies are now in development. These therapies, which allow genes to be edited inside patients, would be impossible but for the development of... see more