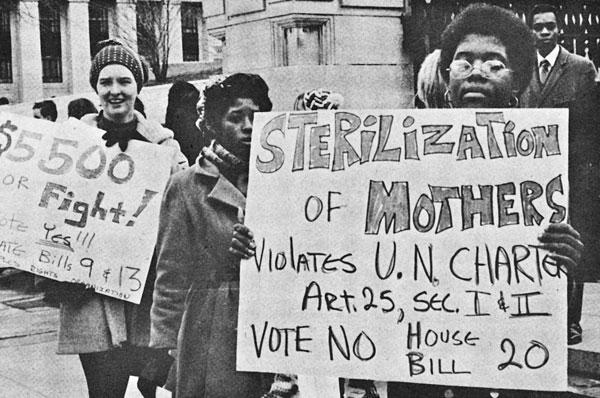 The strength of our coalition is reflected in the range of expertise. Each organization or group uplifted an issue area that helps complete our intersectional approach to the continued impacts of eugenics and forced sterilizations in our communities to this day.

California allocated $7.5 million for reparations for sterilization abuse survivors in its 2021-2022 state budget. On January 1, the Forced or Involuntary Sterilization Compensation Program went into effect, with the Victim Compensation Board (VCB) responsible for administration. The key to getting the program funded was the strength and breadth of the coalition of reproductive justice, disability rights, criminal justice, and allied organizations working for budget allocation.

The coalition was led by the organizational co-sponsors of the policy bill: California Latinas for Reproductive Justice (CLRJ), Disability Rights Education and Defense Fund (DREDF), California Coalition for Women Prisoners, and Back to the Basics LA. These organizations are also the primary advisors to the VCB in rolling out the program, working with them to develop the application for compensation, strategizing outreach to survivors, and planning assistance to help individuals apply.

Reparations under this program are available to two populations: survivors who were sterilized between 1909-1979 under the state’s eugenics law, and those sterilized in California women’s prisons and correctional facilities after 1979. An estimated 600 survivors of these abuses are still alive and eligible for compensation. They can call to request a printed application by mail or download the application through VCB’s website.

Alexandra Minna Stern is Founder and Co-director of the Sterilization and Social Justice Lab, which conducted the research to support passage of the program and works closely with the advocacy coalition. Stern says, “We are pushing to make the claims process as justice oriented and human centered as possible.”

CLRJ’s Policy Manager Lorena García Zermeño says the confluence of a number of factors in 2020 made the coalition’s victory possible on this fourth attempt to get the program passed last year: the racial justice uprisings, the revelation that women had been involuntarily sterilized in an ICE detention facility in Georgia, the release of the film Belly of the Beast about coerced sterilizations in California state prisons, and a state budget surplus.

After the murder of George Floyd and the incredible movement taking place, people made connections that the folks continuing to bear the brunt of systemic inequities and racism are the same folks impacted by forced sterilizations. We helped legislators understand that coerced sterilization is not something that happened a long time ago. We know these practices continue in different institutions across the country and are ones people with disabilities and communities of color constantly have to face. -Zermeño

According to Diana Block of CCWP’s Coordinating Committee,

What happens in this country’s prisons is something that is becoming more public and visible. The specific targeting of women of color inside prisons is exposed by the sterilization procedures that took place, most of which were identified between 2006-2010. That is recent! This is something people have to really understand about eugenics; it’s not just a historical legacy. Mass incarceration itself is a form of eugenics, impacting the reproductive capacity of communities of color.

Now that reparations are available, coalition partners are working to reach sterilization survivors. The challenges are numerous. Survivors may not live in the state anymore, speak English, or receive community services where they might learn about the program. Those sterilized under the state eugenics laws are now in their 80s and 90s. Some have intellectual disabilities, and some may lack access to digital technologies. While records from the earlier period of the law are available, those who are still living were sterilized during the later years, a time when few records are available. The women sterilized while in prison may still be incarcerated and/or their records may not be clear on whether the sterilization was medically necessary.

Coalition partners agree that they will be working with the VCB to think through the methods and modalities that will best reach the two populations eligible for reparations. “Each of our partners works with other coalitions as well, so when it comes to getting the word out, we’ll be able to reach a range of folks,” said Zermeño.

In addition to an approximate $25,000 in cash payment to eligible survivors, the Forced or Involuntary Sterilization Compensation Program ensures that plaques and markers will be displayed at designated sites to acknowledge the sterilization abuse. Carly Myers, Staff Attorney at DREDF, says, “It’s important we center the voices of survivors and family members of people affected by these programs in considering where and what those markers will be.”

Stern recommends that there be more than plaques and markers:

It’s shocking so few people know about this history even though California was an epicenter of the organized eugenics movement in the US in the early 1900s. There needs to be more public awareness that this happened and how it is playing out today.

In 2022, we’re living in an age when the lives and reproductive capacity of people with disabilities are constantly being questioned. With COVID, we can see the vestiges of eugenic thinking in even the highest levels of government; some are basically saying that people with disabilities are expendable. This reparations bill is a material acknowledgment of how eugenic ideology can have such a horrific impact on our communities. It’s incredibly meaningful that the state has stepped up and offered more than just an empty apology and put their money where their mouth is. But we still have a long way to go.

Coalition partners put this issue in the context of the broader assault on reproductive rights, in particular the increasing passage of virtual state bans on abortion, taking place today. Says Zermeño,

Eugenic values continue to seep into state medical institutions as well as legislative policies that impact communities of color, people with disabilities, and low income folks. This win makes clear that the state should never intervene in people’s right to bodily autonomy. Individuals have a right to decide whether or not to have children.

CCWP, Back To The Basics LA, and Belly of the Beast film crew are holding informational sessions about how those involuntarily sterilized while incarcerated can apply for reparations. DREDF will be holding similar sessions geared toward the disability community in coming months.

From the Governor’s website: Survivors are encouraged to visit www.victims.ca.gov/fiscp or reach out to CalVCB at 800-777-9229 or fiscp@victims.ca.gov to obtain an application. They can also send a letter to P.O. Box 591, Sacramento, CA 95812-0591. Applications will be accepted from Jan. 1, 2022 through Dec. 31, 2023. Applying is completely confidential. Compensation paid to the claimant or claimant’s trust will not impact a survivor’s Medicaid or Social Security status or benefits and will not be considered income for state tax purposes or for community property, child support, restitution or a money judgment.