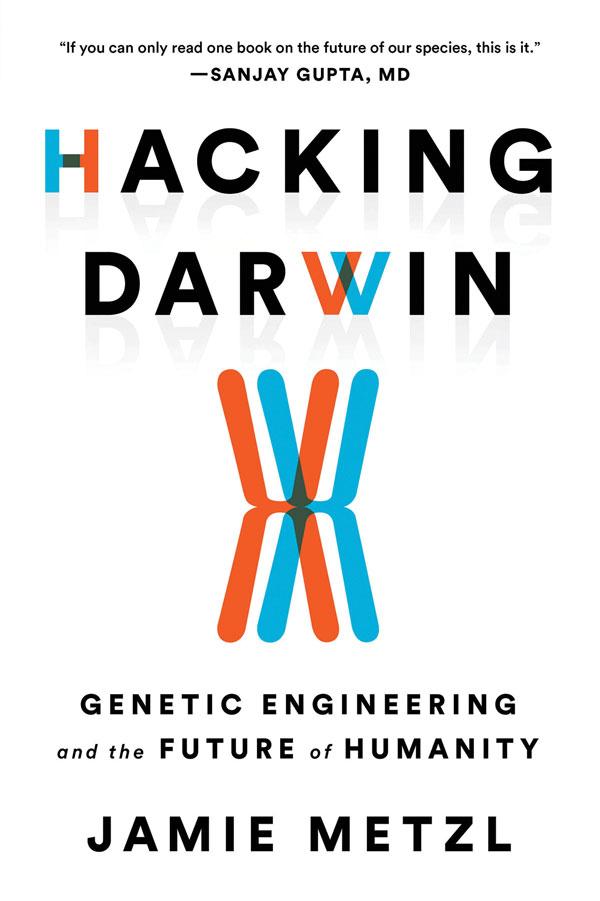 The problems with this book by Jamie Metzl begin with the title, which name-checks one of the most famous scientists in history and links him with either computerized theft or a crude temporary fix. Hacking Darwin sounds good if you don’t think about it.

However, it doesn’t take long for the reader to realize that the title does, in fact, sum up the book. The author is convinced that we humans are software and ready for an upgrade.

Metzl is a technophilic inevitabilist, a well-informed but glib enthusiast. On page 2, he tells the story of how, after “many years” of “writing and lecturing about the future of human reproduction,” he was frozen into silence by one simple question, asked by a woman in the audience:

Would you genetically engineer your own kids?

He doesn’t immediately say “yes.” Instead, he moves smoothly into what is clearly intended to be seen as a kind of Socratic dialogue, leading the woman and the rest of the audience in the direction he wants them to go: support for the practice of engineering children. At which point, he steps back and solemnly intones that we all, collectively, need to ask and answer essential questions that will lead to “monumental decisions about our genetic future.”

In the book, which has a similarly pre-determined endpoint, Metzl leads us through a broad-brush history that includes the way we have already “hacked” species such as the humble chicken. The wild type produced about an egg a month, he tells us, whereas selective breeding over thousands of years brought us chickens with about 25 times the productivity. To satisfy the modern global demand with the un-hacked chicken, he estimates, would require about 775 billion of the creatures! “Imagine how people would feel? Earth would become a planet of chickens.”

Well, except that eggs would undoubtedly be a far smaller part of our diet.

That’s a trivial example of a technique he uses throughout: the superficially plausible extrapolation. Here’s another example, both nastier and more important: If your individual nation-state were to forbid the genetic enhancement of human embryos, enforcement would require conducting pregnancy tests on “all women of fertile age coming into your country,” followed by prenatal genomic testing for any pregnancies and, if necessary, exile of anyone found to be carrying an enhanced fetus. According to Metzl, the outcome could only be that your country would fall behind the rest of the world, and its leaders would have to “adopt the language of Nazism.”

This is a particularly problematic kind of rhetoric, especially in the context of his other comments about policy options.  Metzl declares that global bans are impossible (he never even mentions the Oviedo Convention, the Council of Europe’s binding international treaty which prohibits human germline modification). He flatly states that genetic enhancement of individuals will lead to national success (never actually defined). He asserts, he assumes, and he tries to sweep the reader along with him, all the while insisting that he’s just raising questions and trying to start a discussion.

To be fair, most of Metzl’s facts are fine, if selective. But sometimes he misleads. He does, of course, discuss in vitro fertilization, but doesn’t mention the medical risks associated with egg extraction. He praises the UK decision to license what he and others euphemistically call “mitochondrial transfer” (it’s the nucleus that is actually transferred, into an enucleated egg with unaffected mitochondria), and in the next sentence asserts that “the so-called ‘three-parent babies’ born from this process are not outlaws but ... healthy forerunners of the world to come.”

But as of this writing, and certainly, as of his writing, there have been no such births in the UK; most of the handful that have been reported were indeed undertaken illegally or in dubious regulatory circumstances, in Mexico and Ukraine. (A recent birth in Greece was conducted as part of an approved clinical trial.) And we have almost no evidence about these babies’ health beyond the claims of the self-interested fertility doctors who produced them. There have been no reports by independent physicians and no follow-up studies.

One final infelicitous example of his thinking and writing, from the Introduction:

We each must see ourselves as President Kennedy stepping to the podium in 1962 Houston, preparing to give our own speech about the future of our species in light of the genetics and biotechnology revolutions.

No. Kennedy announced an executive decision that directed hundreds of thousands of other people to undertake a scientific and national image-boosting project to put a man on the moon, funded by billions of public dollars. That is in no way like each of us “grappling” with the questions that human biotechnologies raise. It’s a category error and a dangerous one at that. We don’t need seven billion Presidents, we need everyone to think and write and talk the issue through. Metzl knows that! He says it explicitly. But he falls back on the hero trope.

Of course, Metzl admires and cites enthusiastic promoters of genetic enhancement including Julian Savulescu, Nick Bostrom, and Ray Kurzweil. Naturally, he is blurbed by, among others, George Church and, on the cover, Sanjay Gupta. Metzl is a strong proponent, as they all are, of wide-ranging public discussion that leads to the conclusions with which he himself agrees.

Hacking Darwin represents the kind of daydreaming that seems to recur at times of biology breakthroughs. Today, the development of new gene editing tools has spurred dreams of altering the genes and traits of future children. In the late 1990s, an earlier round of speculation coincided with the pending completion of the Human Genome Project. In 1997, the film GATTACA, still widely viewed today, warned that this dream was likely to turn to nightmare. Of course, Metzl takes a contrarian view of the movie:

In real life, would society really want a genetically nonenhanced person traveling to space if someone else was genetically optimized to be more resistant to radiation and maintain bone density better in a zero-gravity environment?

Not according to the program known as Jamie Metzl.