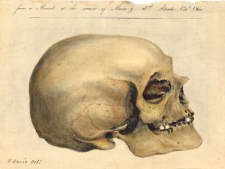 Intelligence is a highly charged word with ties to racist, classist, and eugenic narratives. In the United States, it has been used historically to assert and establish racial and class hierarchies, especially those between Blacks and Whites, and has long been linked to notions of biological difference.

In the early twentieth century, these notions were frequently explicit. As one example among many, Princeton psychologist Carl Campbell Brigham, creator of the SAT and member of the Advisory Council of the American Eugenics Society, wrote in 1922:

According to all evidence available…American intelligence is declining, and will proceed with an accelerating rate as the racial admixture becomes more and more extensive…There is no reason why legal steps should not be taken which would insure a continuously progressive upward evolution… The steps that should be taken to preserve or increase our present intellectual capacity must of course be dictated by science. (Brigham, 1922: 210)

Even in the years following World War Two, when overt claims of racial differences in intelligence were often muted, Nobel Laureate (in physics) William Shockley could openly argue:

I sincerely and thoughtfully believe that attempts to demonstrate that American Negro shortcomings are preponderantly hereditary is the action most likely to reduce Negro agony in the future… I propose a serious scientific effort to establish by how much the distribution of hereditary potential for intelligence of our black citizens falls below whites…If those Negroes with the fewest Caucasian genes are in fact the most prolific and also the least intelligent, then genetic enslavement will be the destiny of their next generation. (Shockley, 1971: 244)

In June 2000, when the completion of a preliminary sequence of the human genome was announced at the White House, President Bill Clinton famously said,

One of the great truths to emerge from this triumphant expedition inside the human genome is that in genetic terms, all human beings, regardless of race, are more than 99.9 percent the same. (GenomeTV, 2012)

But this did not end debate about race, genes, and intelligence. In fact, many observers have noted that the years following this announcement saw an uptick in claims that race is a biologically meaningful system of classification. In 2005, Francis Collins himself suggested that “we now need to study how genetic variation and disease risk are correlated with self-identified race” (Krimsky, 2011: 25).

Among those who study genetics and intelligence today, the discourse about race is couched in more subtle and humanitarian terms than it was in the twentieth century. Take for example G is for Genes, published in 2013 by behavioral psychologist Kathryn Asbury and behavioral geneticist Robert Plomin. The book advocates for “genetically sensitive” schools that use genetic information to maximize a child’s abilities through a system of personalized learning. In a chapter titled “Mind the Gap: Social Status and School Quality,” the authors discuss the impacts of low-income status, poor parenting, and teacher quality on a child’s success in the classroom. Race is remarkably absent from the picture.

Of course, conscious and unconscious assumptions about links between race and cognitive ability haven’t simply disappeared. Although race is not valid as a biological system of categorization (Cooper et al, 2003), it remains an important causal social factor. Any research that has a history of marginalizing certain groups needs to address race explicitly—both as an inherited colonial system of classification and as a form of social inequality.

Recognizing the detrimental impact of race on an individual’s life circumstances is important for creating meaningful and effective improvements and change. Talking about race as a social factor that shapes an individual’s everyday experiences is a way of challenging vast and recurring misapprehensions that locate race in notions of the biological. Failing to talk about it makes that challenge far less likely to succeed.

Both in the social sciences and hard sciences, discomfort, confusion, and even denial often accompany conversations about intelligence. Each side habitually questions the rigor, benefit, and legitimacy of the other’s work. My own research as a PhD candidate sits between these fields, where the tensions between the two are inescapably clear.

On the one hand this means that I’m reading Genome-Wide Association Studies on educational attainment or intelligence, and engaging with geneticists who produce a form of scientific knowledge (Davies et al, 2011; Plomin et al, 2013; Rietveld et al, 2013; Selzam et al, 2016). On the other hand, I’m working with teachers in the classroom who are trying to make sense of why some bodies are less visible in gifted education programs than others (though gaining access in schools has been remarkably difficult, highlighting the charged and controversial nature of this project).

This is terrain on which it should be possible to connect the social sciences to hard sciences. But it is a landscape fraught with competing and underlying political debate. Two of the key questions: Are hard scientists socially responsible for how their work is interpreted and disseminated? Are social scientists truly informed about the science behind the work they often critique?

As an anthropologist, I am aware of the murky origins of my field as a whole—its expansion to legitimize Western colonialism, its use of scientific language and eugenics to validate social hierarchy as naturally occurring and biologically based. Anthropology, like other disciplines, has mobilized the concept of intelligence to maintain racialized matrices of power and hierarchies of inequality.

Scientists, on the other hand, often see their work as separate from social structures and narratives, rather than embedded in them. But insisting on the inherent objectivity of science is dangerous. In the case of genetics research on intelligence, its social impact on the US education system is potentially vast. Those who choose to research the biological basis for intelligence or educational attainment have a special responsibility to recognize this, and to understand its historical and foreseeable pitfalls. Collaborating with social scientists can help to make social implications more clear. While socially neutral research might not exist, socially responsible research certainly should.

Social scientists also have a responsibility. They can understand the methods and techniques of scientific research. And they can engage with geneticists in an open and inquiring manner. Intelligence researchers see legitimate benefits for individuals and society in their work. The social sciences can understand what the argued benefits are and why they are deemed valuable. Having a background in basic genetics and understanding the methodological practices at work in the field can strengthen critiques of the risky assumptions built into the methods and techniques of genetics research or highlight weaknesses in findings.

Scholars working in the hard sciences have faulted the media for misinterpretation, oversimplification, or sensationalism of their work (Asbury and Plomin, 2013: 96). Those in both social and hard sciences have noted that misleading hype often emerges in university press releases associated with the research (Evans, 2016: 11-13).  Understanding the conditions and constraints of research, and what published academic journal findings can actually demonstrate, might test whether this is, in fact, the case and keep researchers and public media in check.

So how do we collaborate across the social and hard sciences? And how do we as researchers make our ways through our work detached from personal lived experiences, appearances, and backgrounds that might inform how we look at another discipline? How might we try and set apart our work from the history that precedes it? Is it too dangerous to even try? Would doing so perpetuate systems that marginalize or make peripheral certain groups? I know my experiences as an ethnic minority and my work in the education system with underrepresented groups certainly inform my approach to research; denying this would ignore potential biases I carry.

Whatever collaboration might look like, finding a common language for discussion is paramount. Part of the disconnect between the soft and hard sciences stems from different academic vocabularies and expressions, making one field at times seem like a foreign language to the other. I think, for instance, that hard scientists might have trouble reading this piece, filled as it is with an anthropologist’s lexicon.  Creating a shared language centered on the pursuit of knowledge could be one good starting point, since both sides already seem invested in this area in their own way. Shared language that acknowledges the social consequences and historical context of knowledge production would also be enormously beneficial. Together, these sets of common concepts and vocabulary might help bridge the existing divide between the social and hard scientists.

Intelligence. Genetics. Race. Socio-economic status. Using these four words in the same sentence has closed doors for me as a researcher. Each is difficult to talk about on its own—and they’re almost explosive when joined together. Despite this, I strongly believe in combining these concepts through a full range of biological and social science methodologies—and in the value of picking up some diplomacy skills along the way.

Gene editing could revive a nearly lost tree. Not everyone is on board.

Photo by Yoksel 🌿 Zok on Unsplash

SYRACUSE, N.Y. — Kyra LoPiccolo crouched in front of a small, white foam box under the hot summer sun. She opened the cooler and from the ice plucked a tiny vial of pollen...