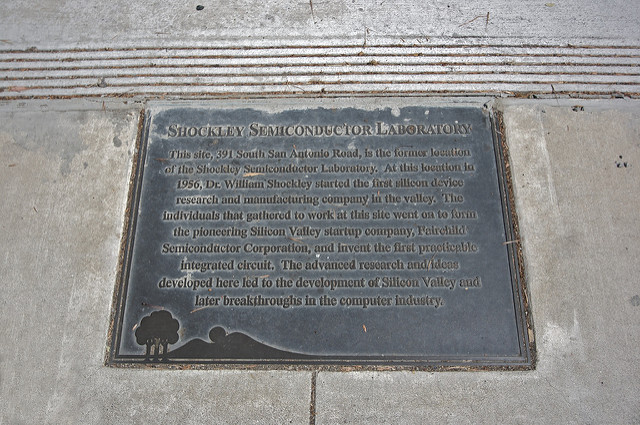 Last week, nearly 400 people crowded in front of 391 San Antonio Road in Mountain View to commemorate what was once the home of the Shockley Semiconductor Laboratory.

Many regard the lab as the birthplace of Silicon Valley, where the first commercial silicon-based semiconductor device was created. The Computer History Museum put on the Aug. 15 event, unveiling a large statue of a silicon atom and a plaque honoring the lab.

But the person who started the lab, William Shockley, has a much darker legacy.

Shockley was a eugenicist who in his later years advocated for the voluntary sterilization of black Americans. In the weeks leading up to the ceremony, some questioned the idea of erecting a monument showcasing Shockley’s achievements. But most who attended this gathering did not want to talk about Shockley’s racist past.

“To me this event is not so much to commemorate William Shockley, but to talk about how Silicon Valley became such an important and unique place,” said Mountain View Mayor Leonard Siegel. He said the event was about the atom, not the man.

DNA databases have become like Facebook for genes, driven by the same fundamental human desire to connect.
Genomics

Cops Can Now Get Warrants for Entire DNA Websites

With just a single warrant, a Florida detective obtained access to the DNA profiles of more than a million people — and experts say the case sets a dangerous precedent.

Ancestry.com and 23andMe are the largest consumer DNA sites, holding...

How Should "CRISPRed" Babies Be Monitored Over Their Life Course to Promote Health Equity?

These patients' physical, mental, and social health monitoring should be coordinated by clinicians in ways that anonymize patients’ data for privacy protection but also allow for national and international aggregate evaluations.
Human Genetic Modification
© Center for Genetics and Society / A Project of the Tides Center 2020 All rights reserved.