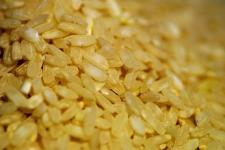 For example, advocates for genetic engineering and genetic modification have adopted the term “precision agriculture” to rebrand unpopular technologies that produce GMOs. Divorced from its meaning, precision agriculture sounds very attractive indeed, as if the untidiness of life — and farming — can be tamed if only we apply a sharp enough blade.

Our regular readers know precision agriculture by its other names, “genetic modification” and “genetic engineering.” One genetically engineered crop, in particular, Golden Rice, exemplifies the hype and hyperbole of modern biotechnology.

Golden Rice is genetically engineered to contain beta-carotene, a precursor to Vitamin A. It was developed in the late 1990s to treat Vitamin A deficiency (VAD) — a form of malnutrition that can lead to blindness and death. VAD mainly impacts children and expectant mothers in developing economies across Southeast Asia and sub-Saharan Africa (where plain white rice provides daily calories but little actual nutrition).

From a distance, the theory of Golden Rice offers elegant, even algebraic simplicity: If we add the thing that’s missing (Vitamin... see more