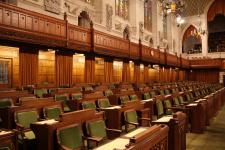 The UK House of Commons voted today to clear the way for fertility clinics to use controversial germline engineering techniques to create embryos with DNA from three people. If also approved by the House of Lords, the bill would enact an exception to the UK’s law against inheritable genetic modification, which is also prohibited by more than 40 other countries and several international human rights treaties. Many questions have been raised about the health risks of the techniques, and about the policy implications of crossing the long-held bright line against human germline modification.

“We believe the House of Commons has made a serious mistake, which we hope does not have dire consequences,” said CGS Executive Director Marcy Darnovsky, PhD.

If the law is enacted, the UK’s Human Fertilisation and Embryology Authority (HFEA) would be able to allow fertility clinics to use the techniques on women who are affected by certain kinds of mitochondrial disease and who hope to have unaffected and genetically related children. The procedures would be conducted outside the context of a clinical trial, and with no requirement for follow-up study.

“Scientists around the world – including expert members of a US Food and Drug Administration committee – have raised many cautions about the risks to any children that might result from these techniques,” said Darnovsky. The Center for Genetics and Society is now calling for the HFEA to conduct further safety studies, including those it originally said it would require but later dropped.

“We urge women who might consider undergoing this biologically extreme procedure to carefully investigate the risks, and the areas where evidence of safety is lacking,” Darnovsky continued. “We hope women will be informed that they do have other, safer options for having a healthy and genetically related child including the genetic screening of IVF embryos.”

Darnovsky also warned about the policy implications of putting germline genetic modification procedures into practice. “Many who support moving forward with “3-person IVF” techniques have done so with the understanding that they are very different from other forms of inheritable genetic modification,” she said. “We sincerely hope that scientists, policy makers, and others will join us in working to strengthen the widespread commitment to forgo efforts to modify the traits of future children and future generations.”

CGS released an open letter to Members of Parliament on January 30 that enumerates the serious safety and policy risks posed by “3-person IVF,” with references to scientific literature documenting them.