Dominic Cummings, Stephen Hsu and Eugenics in the House 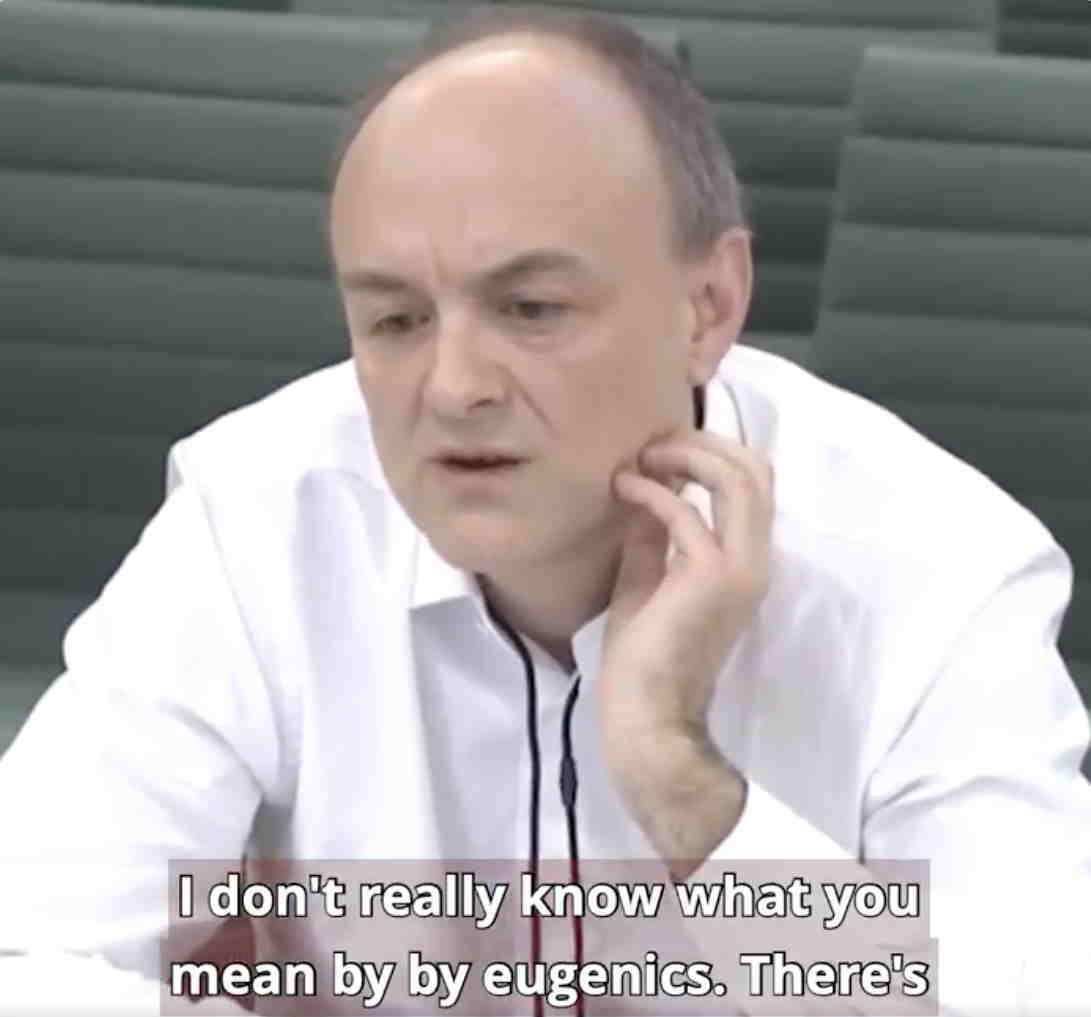 Dominic Cummings, Boris Johnson’s former brain (he was forced out last November), claims not to know what eugenics is. This is odd, since he’s been called out for advocating it for years (here’s our 2013 take on his fondness for technocratic eugenics).  His implausible denial came during questioning on March 17 before the UK Parliament’s science and technology committee. MP Dawn Butler asked whether he thinks eugenics is a science and does it need more research; she posted the video on Twitter, noting that he “seemed to pivot quite quickly.” His response started, after a brief pause in which you could almost hear his brain working:

I don’t know really what you mean by, by eugenics. There’s obviously a huge amount of work now going on in genomics, in understanding how the genome works. And there’s a huge amount of work happening in genetic engineering and the technologies like CRISPR, which have both huge promise and also huge potential disasters.

And thus to patriotic boosterism, “our leadership in this field” and all that for another 30 seconds.

The hearing was about one of Cummings’ pet projects, the Advanced Research and Invention Agency (Aria; not just for opera fans anymore). The Guardian describes it as “a US-style defence research agency to back high-risk research projects.” A hilarious Daily Mail report calls it “the monster to his Dr Frankenstein, if you will.” This new semi-governmental agency is expected to be running early next year, with £800m of government funding and — this is lovely — exemption from the UK’s Freedom of Information Act.

But who should head it?

Stephen Hsu, Cummings told the committee. Of course! Cummings has been a fan of the “genius genes” physicist and trait-selection entrepreneur since at least 2005. By then, Hsu was already interested in “genius” and by 2011 this blog had noticed his work with BGI, the Chinese genomics company. Despite this, Michigan State hired him in 2012 as vice president for research and graduate studies. In 2013, “genius genes” were said to be three months away and Hsu was credited with conceiving the project. That didn’t happen, but in 2017 Hsu co-founded Genomic Prediction to test embryos for “intellectual disability,” “idiopathic short stature,” and other “polygenic disorders.” By then the students at Michigan State were aware of Hsu’s opinions and started a campaign that led in 2020 to him being forced out of his position as Senior Vice President of Research & Innovation at Michigan State University last summer for being a vocal scientific racist and eugenicist.

Naturally, Cummings blurs his tracks. He also recommended the physicists Michael Nielsen and Chiara Marletto, and the mathematician Timothy Gowers.

Cummings may be “part football hooligan, part evil genius” but plenty of people are onto him by now. Even before this appearance, Leonid Schneider, a recovering molecular cell biologist turned science journalist and soi-disant certified troll, tweeted:

So #ARIA merely sounds Aryan by coincidence? Will #eugenics be top-funded research now? Britain is indeed very strong there.

Well, it was a Brit that invented it — Francis Galton! They renamed the Eugenics Education Society after him in 1989, way too late and, ironically, the year before Troy Duster published his groundbreaking Backdoor to Eugenics about the eugenic implications of modern technologies in contemporary society. Rule Britannia, Britannia waives the rules, Britons never, never, never shall be slaves! Offer not applicable to immigrants and the uneducated, unwashed masses. One has to draw the line somewhere.