Should California Put $5.5 Billion Into Stem Cell Research? Voters To Decide With Prop. 14. 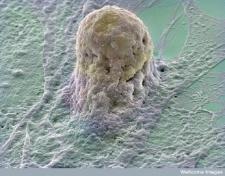 A measure on the November ballot would allow California to issue $5.5 billion in bonds to fund stem cell research on treatments for cancer, Alzheimer’s and dozens of other diseases. Supporters say it’s a needed boost, but opponents say the move will unnecessarily increase California’s budget deficit.

Proposition 14 would allow California to use bonds to fund the California Institute for Regenerative Medicine, which distributes grants to scientists for stem cell research. The institute was established in 2004, with $3 billion in state funding from voter-approved Proposition 71.

If this November’s proposition fails, proponents of the institute say much of their research will be underfunded and potentially have to stop. Opponents of the measure say the federal government and private industries can fill the gaps.

Stem cells are valuable to scientists because they mature into the cells in bones, muscle, nerves and organs. They can be used to repair damaged tissues, test out new drugs or simply help researchers understand how diseases occur.

Money from the institute is currently funding clinical trials for drugs that could help patients... see more