Book Review: The Orphans of Davenport, by Marilyn Brookwood

Eugenics, the Great Depression, and the War Over Children’s Intelligence
By Pete Shanks | 08.24.2021
Biopolitical Times 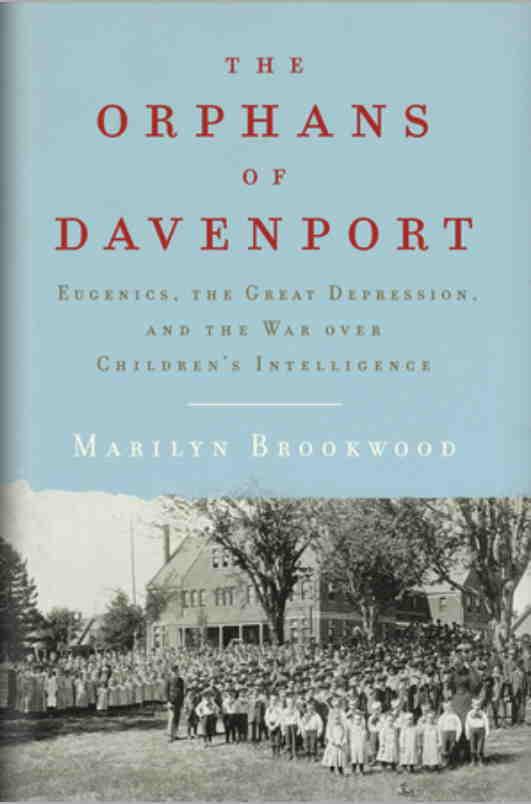 This is a hard book to read, but worth the anguish. It describes the terrible treatment of infants at the Soldiers’ Orphans’ Home in Davenport, Iowa in the 1930s who were deemed unfit for adoption because they scored low on IQ tests. It also reports on attempts by path-breaking psychologists in Iowa to correct the eugenic assumptions that underlay the babies’ treatment and labeling, and the appalling reactions of some distinguished professors to their efforts. It’s deeply researched, well written, and deliberately limited in its scope. Eugenics in the U.S. involved much more than orphanages, and much more than academic debates, but psychologist Marilyn Brookwood has documented one strand of resistance to eugenic beliefs and practices. That in itself is a very useful contribution.

The story of eugenics in America can be told in many ways. Brookwood focuses almost entirely on some of the people who opposed it, how they came (sometimes rather slowly) to their dissenting views — for eugenics was the orthodoxy in science, in politics, and in society in general — and their struggles to overcome the entrenched power structure. Race was not the major issue in this particular struggle (Iowa was more than 95% white at the time), but class obviously was.

Eugenics, then and now, is by no means only about intelligence. Whatever exactly constitutes intelligence is not an easily measurable quantity like height, for instance; and it’s worth pointing out that in many countries average height is not what it once was — because of environmental influences. Eugenicists impose values of their own device. They view people as inferior for absurd reasons. Skin color, for example. Religious belief. Sexual preference. Political persuasion. And especially what they regard as disabilities. (Much more information about that can be found on this resource page, which includes commentary and a selection of annotated links to help further understanding of how ableism can distort narratives.)

For the specific history Brookwood describes, the simple and shocking story of two very young girls serves as an introduction. Both were sent to the orphanage, one in September 1933 at three months, the other in January 1934 at eleven months, because their mothers were ruled incompetent — one was in an institution for the insane, the other a prostitute officially delineated as a “moron.” The infants were tested for intelligence and found to have very low IQs: one, identified throughout as CD, was assessed at an IQ of 46 at thirteen months; while the other, BD, had an IQ of 35 at seventeen months. In both cases, these low scores were ascribed to heredity.

In recounting these incidents, Brookwood seems to accept the terms of the debate, relying on IQ as the standard of measurement. The consensus view of the time was that, in the words of Lewis Terman, head of the Stanford psychology department (quoted by Brookwood on p. 67):

The segregation of the feeble-minded, which is sure to follow the further use of intelligence tests, will besides aiding in the elimination of degeneracy, remove a demoralizing and retrograding influence from the lives of many normal children.

Note his assumption that environmental and social conditions had no influence on intelligence, which he believed to be entirely heritable; and yet somehow the “feeble-minded” could affect the “normal” children.

Terman had adapted the work of Alfred Binet to create the Stanford-Binet Revised test; he also adapted the work of Wilhelm Stern in using the term “intelligence quotient” (IQ). However, Binet himself disapproved of reducing “intelligence” to a single definitive number. The use of IQ, as he foresaw, reifies the concept in profoundly unhelpful ways, the harms of which continue today. For instance, “high IQ” is what certain entrepreneurs doing genetic testing of embryos plan to sell to hopeful parents.

Back in the 1930s, the IQ results of the two orphan babies meant they were ineligible for adoption, and doomed to a life in institutions, which were horrible places. For lack of any better prospect, they were moved to Woodward State Hospital for Epileptics and School for the Feebleminded. There, the “feebleminded” women of Woodward doted on the children, played with them, and loved them. To the amazement of everyone, both girls began to thrive. After eight months they re-tested at 77 and 87 respectively; six months after that, they were 100 and 88; after another six months, CD registered 95 and BD 93 — both in the range considered normal. They were then removed from Woodward and soon adopted, separately.

According to the scientific theories of the day, these developments were not possible. The prevailing view was that intelligence was not only measurable — even in infants — but unchangeable, and the key determinant of social and economic success. The scientific establishment, led by Terman, at first flatly refused to believe the data being reported by the lower-status scientists from Iowa. Terman’s biases were strongly racist as well as generally hereditarian and eugenicist; it’s not much of a mitigation that by the time of his death in 1953 he had become “less sure” that racial differences drove intelligence levels.

Inevitably, the Iowa scientists, notably George Stoddard, Beth Wellman, Marie Skodak, and Harold Skeels, were wrongly accused of cherry-picking data and ignoring counter-examples. Terman falsely claimed that the results were unique and insinuated that the data was unbelievable, as part of what were later described as “polemics of a rare height of violence.” Even one of his most respected graduate students warned him that a paper by his statistician “contains certain biases that weaken its effect,” and Terman himself resorted to ridicule and sarcasm; in his own words, he was “none too polite.” Stoddard occasionally responded in kind, admitting before an important national meeting in 1940 that “[o]nly a confirmed Pollyanna would say that we have performed our task in a spirit of loving kindness.”

CD and BD went on to have stable marriages and at least two children each, as a follow-up study by Skeels established in 1961. They remembered each other fondly but had completely lost touch. Skeels gave each of them the contact information of the other but never knew whether or not they ever got in touch.

Update 8/30: The original text wrongly attributed the “Pollyanna” quote to Terman, not Stoddard.